Five feet from the shore of the Salish Sea in British Columbia stands a majestic cedar chapel artfully crafted from locally salvaged dead cedar trees. The exercise in geometry combines the architectural features of a Norwegian stave church with a Burmese pagoda and is a culmination of the lifelong works of the 80-year-old retired mathematics professor Lowell Hinrichs. “I have been extremely fortunate in life and I cannot imagine a more appropriate project for this phase of life,” said Lowell. “I began the chapel two years after having received a Stage IV cancer diagnosis and was not at all sure I would be able to finish it.” 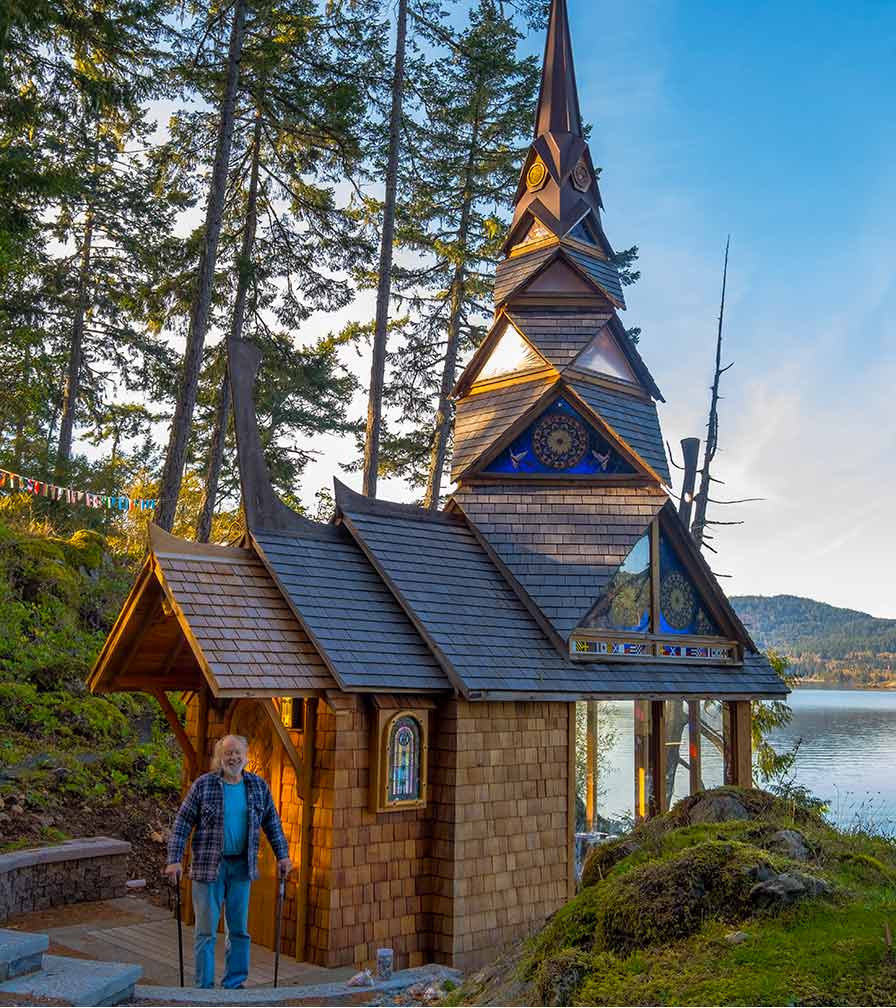 In the 1970s, Lowell assembled a small co-op to purchase 112 acres of land in East Sooke, British Columbia where he built a home for himself and his family using timber from his property. Lowell owns a portable sawmill that enables him to turn fallen or dead trees into lumber for building a variety of wood projects. “I bought the saw after a very big storm blew down many good douglas fir logs,” said Lowell. “Although I heat with wood, and there is a good market for firewood, I did not want to see all of those good trees end up as firewood so I bought the Wood-Mizer. It’s much more satisfying use of the trees and a lot easier for an old man than splitting large rounds of firewood!” In addition to his family’s home, Lowell has built several projects throughout the years including a stunning shoreside wharf and boat shed. “The ability to turn wind falls and dead trees into useful lumber and to do so with considerable accuracy in thickness and relatively smooth surfaces is very valuable.” 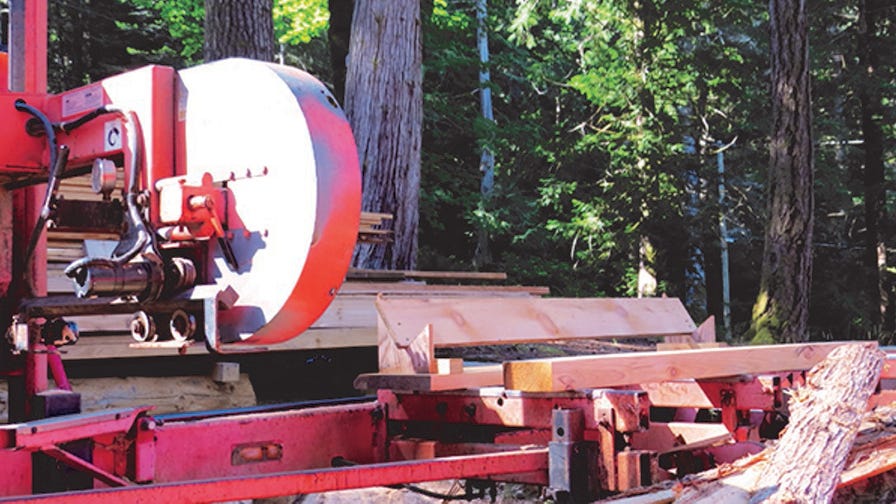 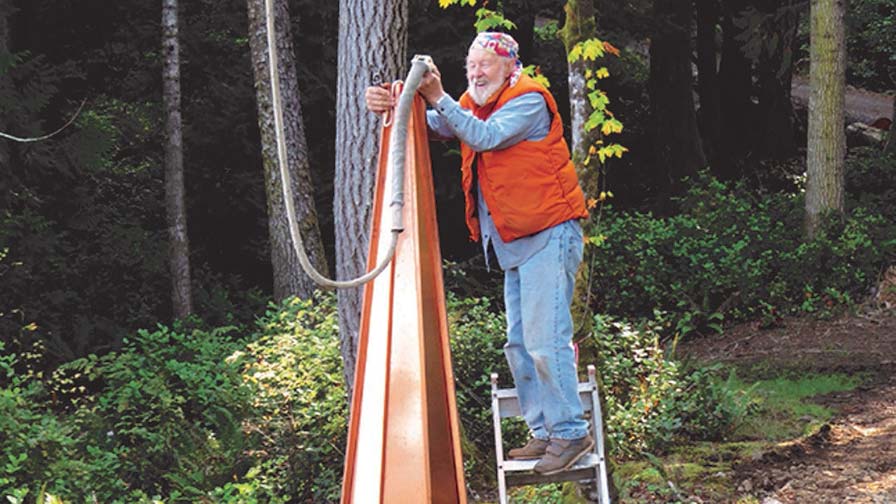 The son of a Lutheran pastor, Lowell has a life-long interest in mathematics, geometry and architecture. “Mathematics is the key to understanding everything,” said Lowell. During breaks from teaching at the University of Victoria, Lowell often accompanied his father at new church dedications and was enamored by the church architecture. “I sat in the service and looked at the architecture wondering why did the architect do this rather than that and so forth,” said Lowell. “For example, I always thought that there shouldn’t be a ceiling above the alter. It should be open and go way up so that light came both literally and figuratively down from above.” 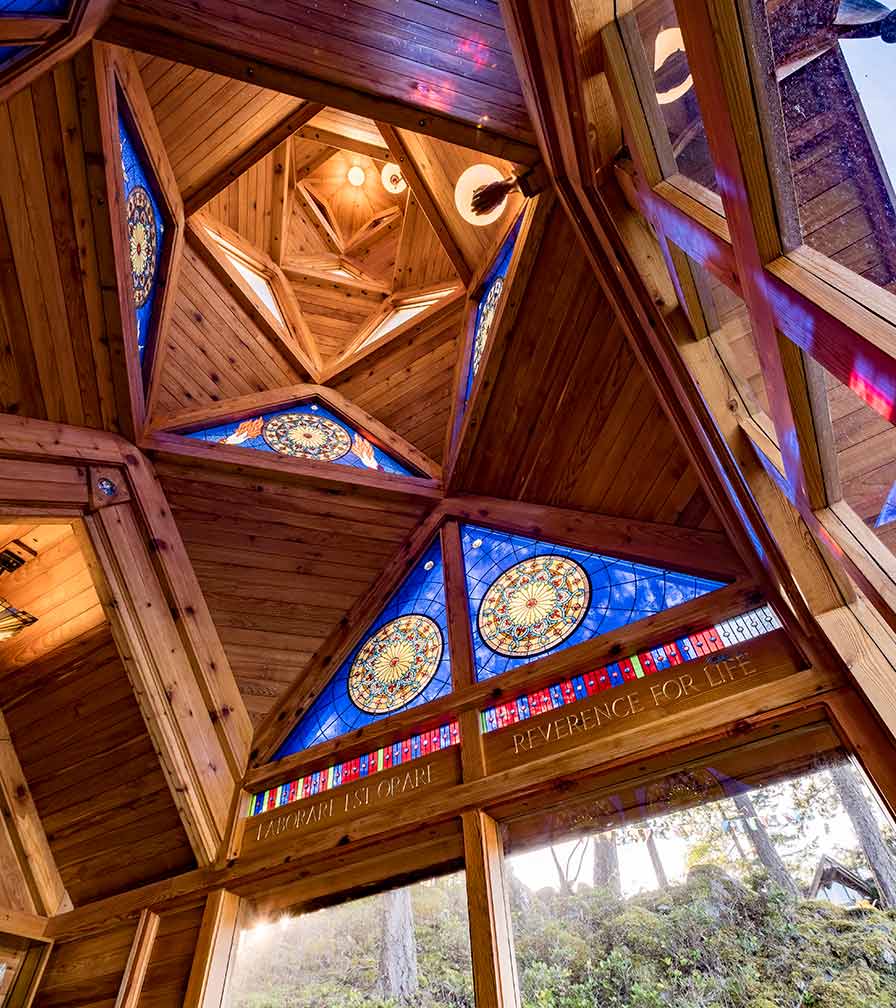 When a neighbor in the co-op discussed building a chapel on the property, Lowell gained interest and began designing a structure even though he didn’t intend on building anything. However, by the time the design came to fruition, Lowell was convinced that he should build the chapel. “There was a fusion of motives and some of them deepened during the construction process,” said Lowell. “Perhaps the main intent is to provide a meditative space to enhance appreciation for the land, family, friends, and the fragile gift of existence.” 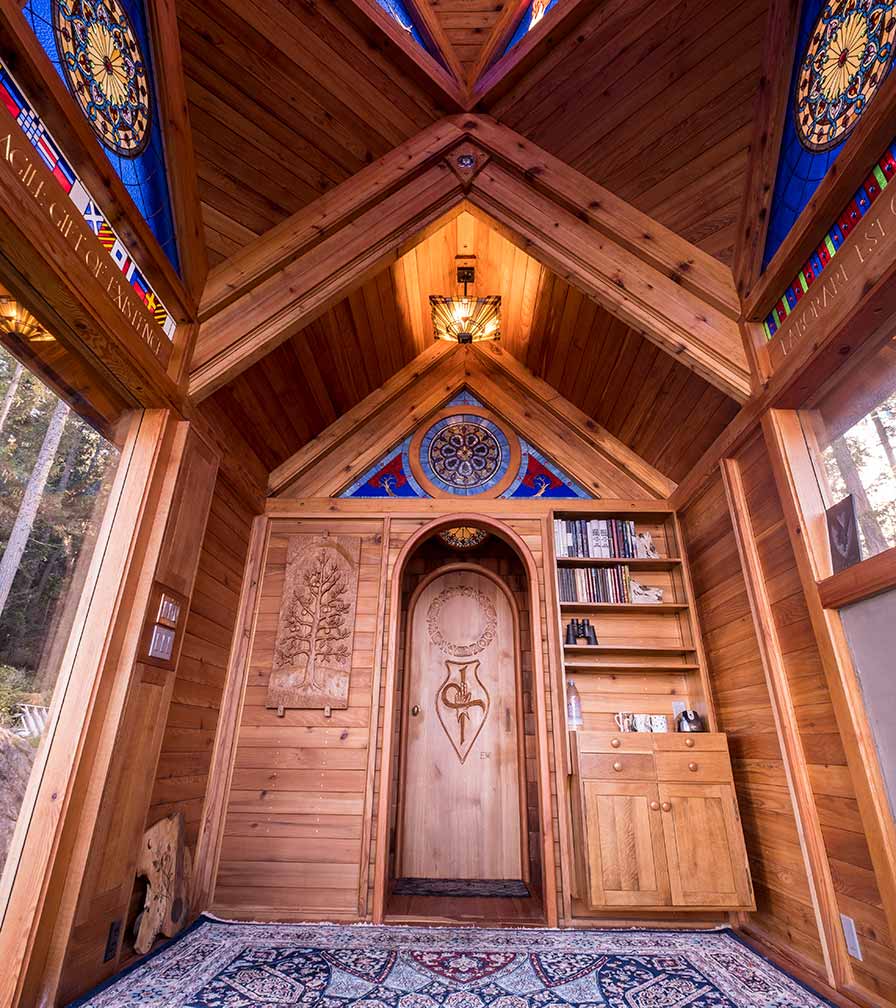 With help from family and friends, several cedar, douglas fir, and garry oak trees were removed from the property and milled into boards and beams on-site with Lowell’s Wood-Mizer LT40 portable sawmill. “Part of the project was intended to be a people thing, so a lot of people helped sawing lumber because it’s fairly easy,” said Lowell. “It’s a satisfying thing to turn dead trees into boards.”With several of the beams too large for Lowell’s woodworking tools, most of the squaring and planing of material was completed by with a hand sander and power planer. “Lots of people have offered to help with the project and I couldn’t use people as much as I had intended because I was making it up as I went along,” said Lowell. 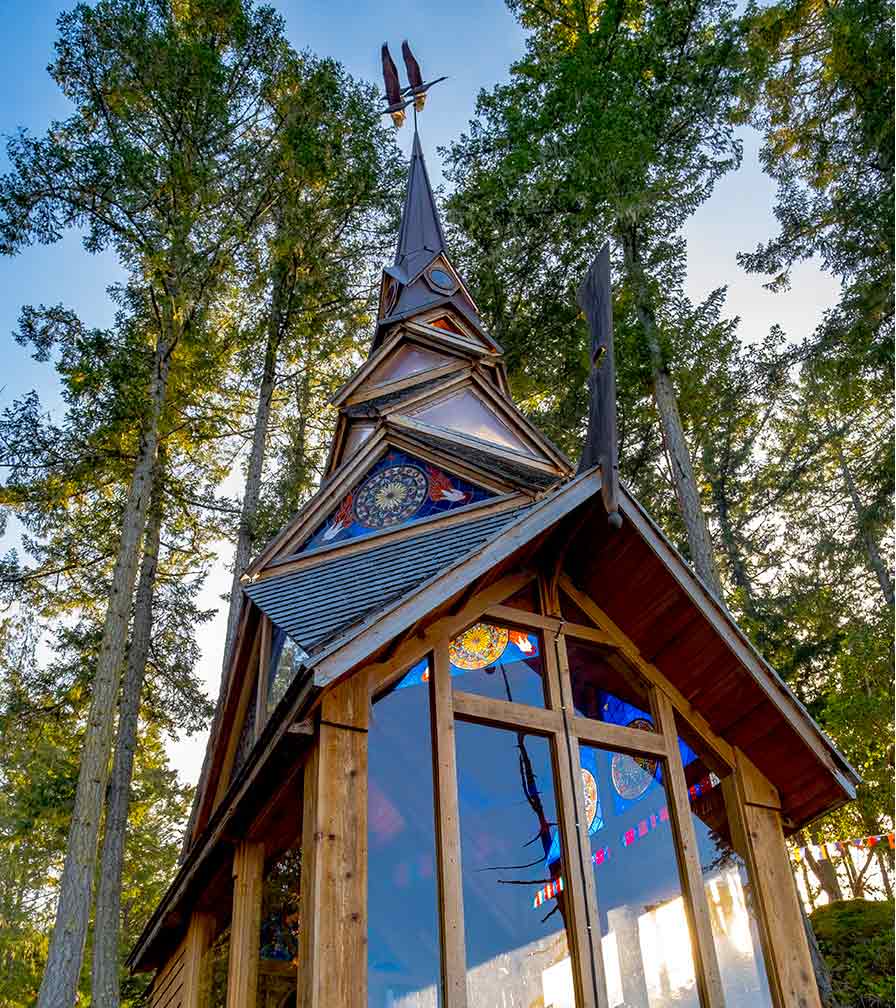 Most of the chapel is constructed with half lap joints that were created by making several parallel cuts with a table saw, knocking out the pieces with a hammer, and sanding it down. “Structurally it is post and beam, but the structure is a little unusual because the beams are under almost no bending forces,” said Lowell. “Almost all of the beams are under either tension or compression. A major part of the structure is the steeple which is constructed of identical shaped modules of decreasing size. Every angle is 45 degrees so that the vertical layout is the same as the horizontal layout.” 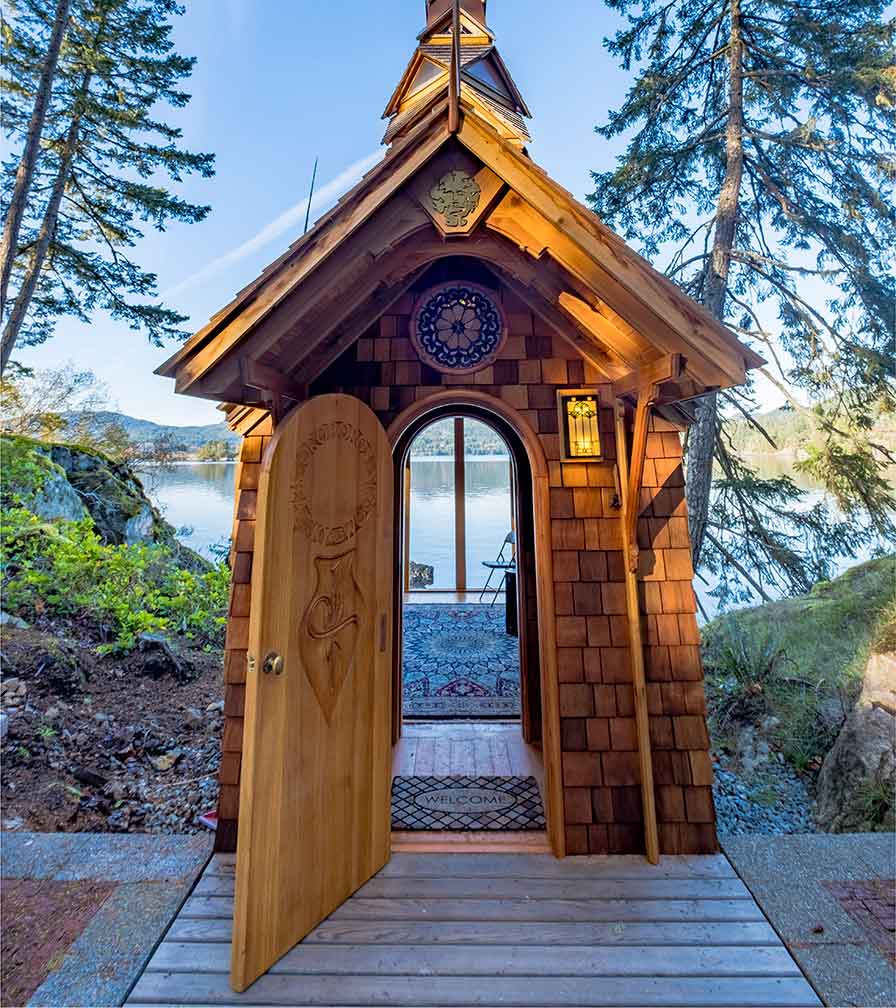 Throughout the course of five years, the 9’ wide, 17’ long and 26’ high chapel was completed. No detail was spared including several intricate wood carvings, stained glass windows, and many symbolic elements. The carving on the chapel door combines several thematical elements including the burning bush, the fruit of the tree of knowledge and life, and the recognition of respect for the land. 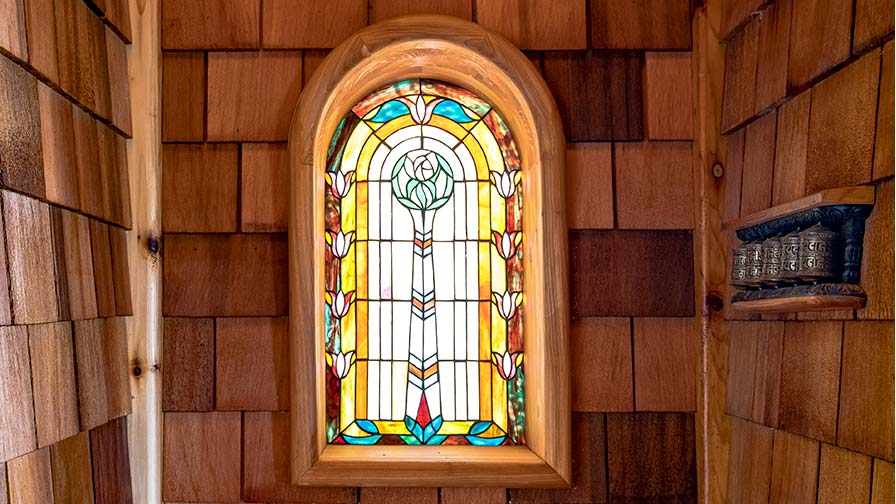 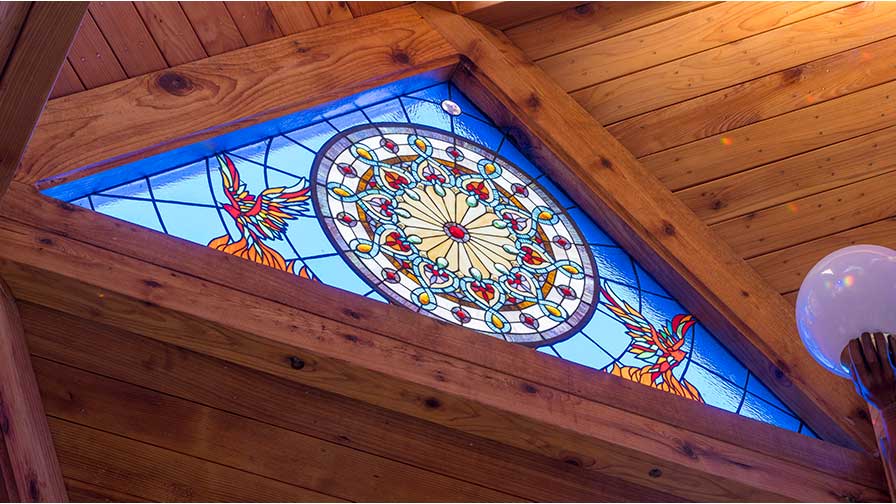 “The positive response has been very numerous and gratifying,” said Lowell. “Friends frequently drop by with out of town visitors to show them the project. In addition, my grand niece was married at the chapel and it was a very special and rewarding event. The building has reinforced my awareness of the important things in life, love, respect for others, and an appreciation for the fragile gift of existence.” 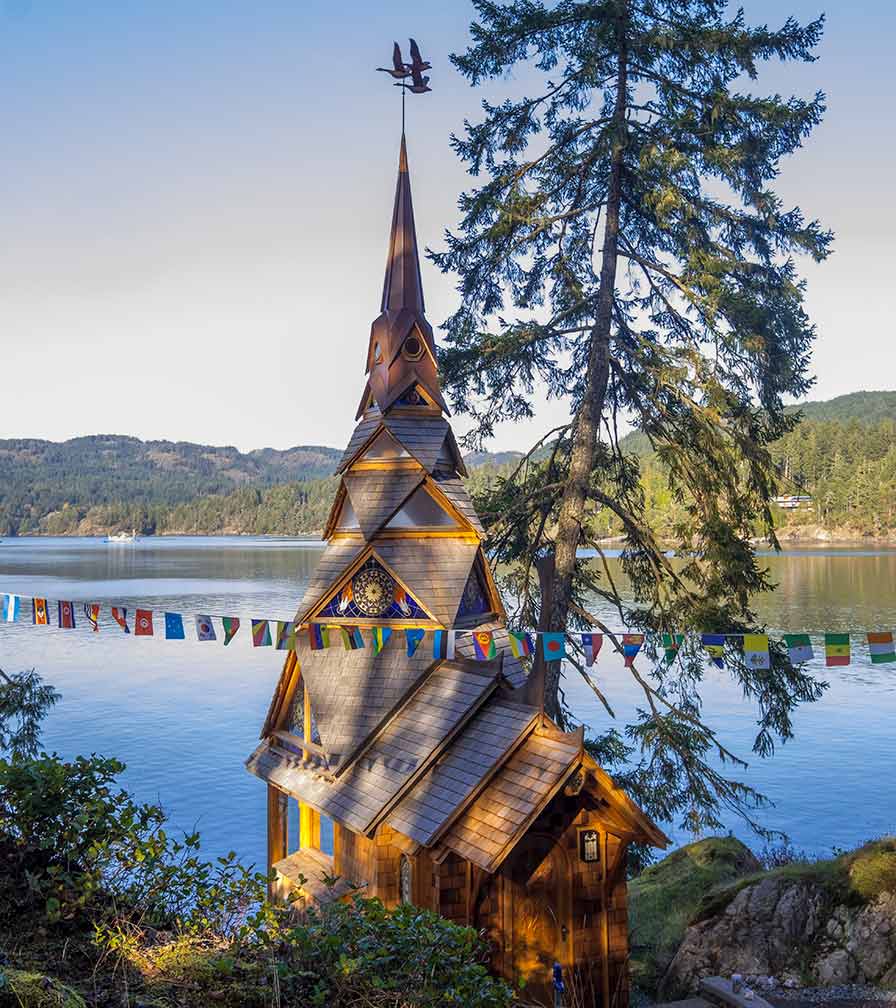